January  flowed into February as February blew into March, and  as the month progressed  the ground began to dry out  and the sun began to shine  enticing colour and  a host of beauties to show their faces around Darrynane. The lovely white bells of the Snowdrops came first followed quickly by delicate lemon primroses. Daffodils bloomed too and soon  spikey leaves of the bluebells littered the garden and woods as they strived upward towards the light.The Camellia bushes are also covered with pink and deep red flowers. 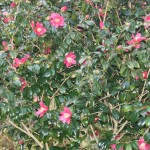 Gradually the days grew longer and suddenly it’s light from 5 am until 6pm on a bright day. Many species of birds including: Jays, Magpies, Robin, Blackbird, Nutcatcher, blue tit, great tit, black cap, Buzzard and thrush crisscrossed overhead looking for places to nest and their voices chorused at dawn – always a sign Spring is on the way. Frogs arrived in the driveway pond in  early March and left and returned later in the month leaving their spawn. Little Tadpoles now swim in and out of the irises and lily pads preparing to become frogs.

No wonder Blackbirds are declining. We have a pair who nest here every year and they pick the most unsafe places. This year they are trying to build their nest around the surface of the  pond outside our kitchen window. Frodo watches out of the  lounge  window as they  come back wards and forwards to their chosen place. As soon as he’s outside he goes straight to the place they have been and sniffs around  the ground, all the places they could choose around Darrynane – last year David had to move them on as they tried to build their nest where the cat could get to them.

Elephants ears – I don’t know the proper name I’m sure someone will tell me!

After a busy year last year with guests and   updating both The Lodge and Lakeside and Riverside and The Stables needing very little work, we’ve enjoyed a quieter start to the year. We’ve welcomed new and returning guests for  winter breaks and are looking forward to the year ahead with many returning and new guests  to meet and  enjoy a well earned holiday.

Off for a walk on the moor now so have a great weekend. Don’t forget the clocks spring forward tonight – summer’s on its way!!