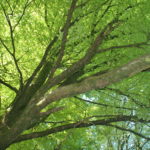 As David, the dogs and I were working in Darrynane woods yesterday afternoon, Sunday mid May we suddenly heard a terrible commotion. We all turned to look up to the sky and saw two adult Crows squabbling, or so it seemed.  The squawking and cawing continued until a Buzzard alighted from a nearby tree.  The crows flew after the larger bird hassling and badgering until it was far away.

We then turned our attention to our chores and noticed a young Crow on the ground near to us. At this point I decided to take our dogs inside before they saw the bird and opted for a chase.

The young Crow oblivious to anything around it started walking towards were David was working, much to its parents displeasure as they  frantically called a warning from a branch above. It dawdled steadily on unaware of any danger. Moments later David caught sight of a fox on the perimeter wall watching the young bird. David immediately shouted startling the fox.  At that same moment a gust of wind swirled towards the youngster. He lifted his wings, flapped and began to soar upwards into the bright blue sky and  away followed closely behind by his two proud parents.

It is such a rare moment to witness nature at its best – we are very fortunate to enjoy it when it happens.